Comedian George Lopez debuted “Lopez Tonight” on Monday, November 9.  A veteran of the stand-up stage, Lopez’s foray into late night does little to mess with the familiar format honed by Johnny Carson and tweaked by Leno and Letterman: it includes a monologue, video-taped comedy segment, celebrity interview, and musical guest.

The primary difference, as pushed by Lopez, is the “color” of the show.  “¡Órale!” he exclaimed as he walked out on stage.  “The revolution begins right now!” 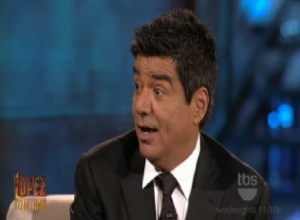 It’s an odd role for Lopez, the man who carved out his niche in prime time as a Mexican Bill Cosby.  His eponymous sitcom featured a middle (maybe even upper-middle) class family struggling with the same kinds of life issues faced by any family.  Its lack of depth and specificity relating to Latino life was deliberate.  It didn’t evade “race,” but it rarely let it mean more than “we” are slightly different but still the same.

Putting race at the forefront of his first late-night monologue, Lopez now seems to be making himself both a political advocate (“This is what American looks like,” he proclaimed of his multiracial audience) and a purveyor of “race talk.”  Most of his first monologue focused on the kind of “race comedy” we’ve heard since the early days of Richard Pryor: he made fun of whites (often drawing them as “racially other”), used racial stereotypes to get easy laughs, and even offered some multiracial celebratory jokes (describing how much better “we” look when we “mix”).  The rest of his stand-up built off of relationships and other “general” topics, while consciously carving out the terrain on the edge of “urban hip” (of the marriage of a centenarian and a 20-year old he said “That’s not polishing the knob, it’s called antiquing”).

The problem was, it didn’t reflect the depth, creativity, and authenticity of later Richard Pryor.

George Lopez is selling himself as something new in late night because he is something brown in late night.  The first person of color to host a “major” late night show since Arsenio Hall, Lopez made his statement both literally and symbolically, with his inaugural guestlist composed of Eva Longoria, Kobe Bryant, and Carlos Santana.  But being brown isn’t always representing something new.

Lopez’ taped video segment was a racial tweak of a standard Leno segment.  His camera crew stopped a person of color on the street and talked to them briefly before asking them if they fulfilled a ubiquitous stereotype (they asked a black guy if he had been to jail; an Asian man if he had a small penis).  The audience, and two members chosen from them, then had to guess what the person would say in reply.

Lopez is certainly providing something different in late night.  Frankly, I’m not sure we’ve had this kind of clumsy interaction with the meaning of race and racial diversity in the US since the 70s.  But, so far, that isn’t panning out to be something better.  I’m willing to let him settle in to his new role and see what he has to offer in the weeks and months ahead.  Let’s hope it entails some growth.

From today’s Variety,Chicano comedian George Lopez has signed on to produce and star in a late-night talkshow on TBS.

Lopez will  air starting this fall, at 11 p.m., Mondays through Thursdays.  He will follow the standard late night format, with interview guests and musical and comedy acts.