“On Two Fronts: Latinos & Vietnam” is a new documentary examining the impact of the Vietnam War on Latino families.  Directed by Mylène Moreno, “On Two Fronts” premiered on PBS last week.

As a historian who is currently at work on a book on the same topic, and as a Chicano who is the son of a Vietnam veteran, I was honored to be interviewed for the film. My work also contributed to the education materials they produced to make the film useful to K-12 classrooms.

You can access all the classroom resources–which are aligned to the Common Core standards–by visiting the main website for the film.)

For the next month, you can watch the film in its entirety online at PBS. I hope you check it out and share it with friends and family.

We’re remodeling our kitchen. Or maybe it’s more like a “do-over” or a “take two.”

Our house turns 88 years old this November. That’s pretty old for Southern California. And it’s a small house, at least by modern standards.  A galley kitchen from 1927 has a lot of charm (we have a built-in ironing board, for example) but not a lot of room or conveniences associated with 21st century family life.

So we’re opening it up and making it brand new again. Well, our contractor is. Round one is gutting it. That includes removing our plaster ceilings and walls, tile floors (put in by last owner), and even knocking down some walls.

Here’s the old kitchen, with original cabinets in the front/left of the shot and new cabinets we added on the right: 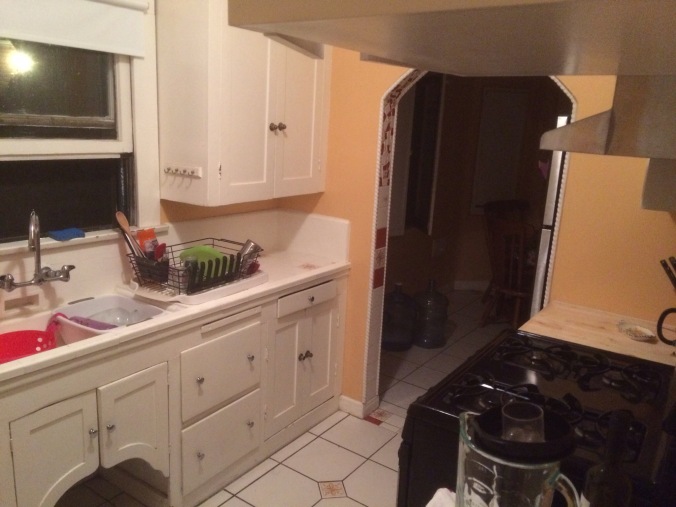 There’s little breakfast nook beyond the arch. A modern fridge (even our small one) can’t fit in the main kitchen so we put it in there. 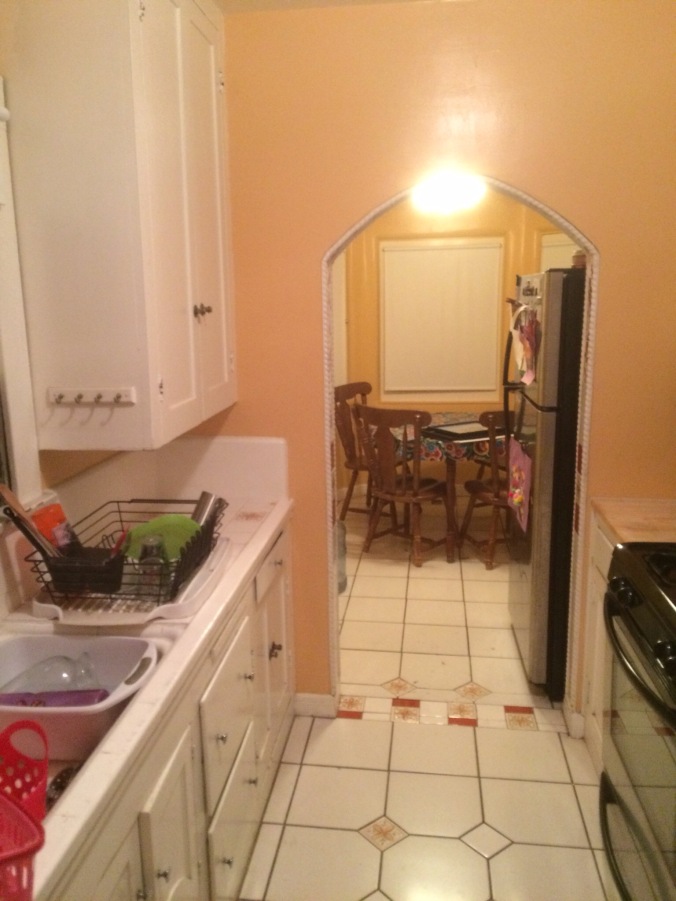 This is the “mud room” that goes out to our backyard. It’s also where the dog sleeps.

And here’s the end of day 2! No more walls, ceiling, arch–no nothin’! 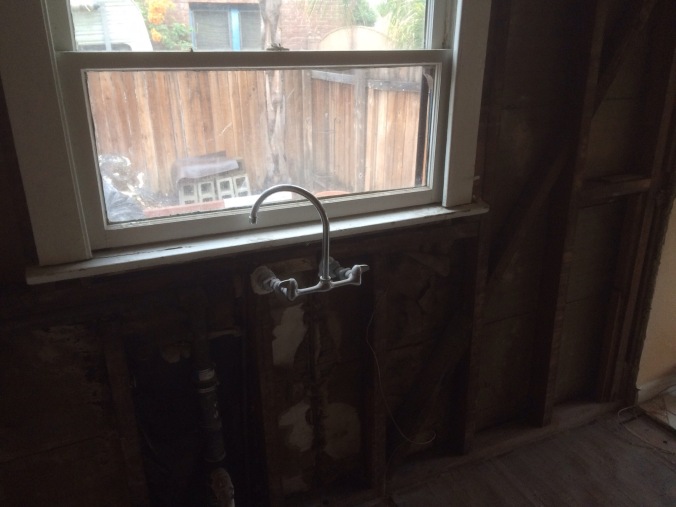 You can also see the dog’s room is opened up to make one larger space.

At the end of day 3 most of the poorly-installed tile is removed, exposing the original floor that’ll be refinished.

And this is what an 88-year-old kitchen looks like deconstructed and neatly piled: 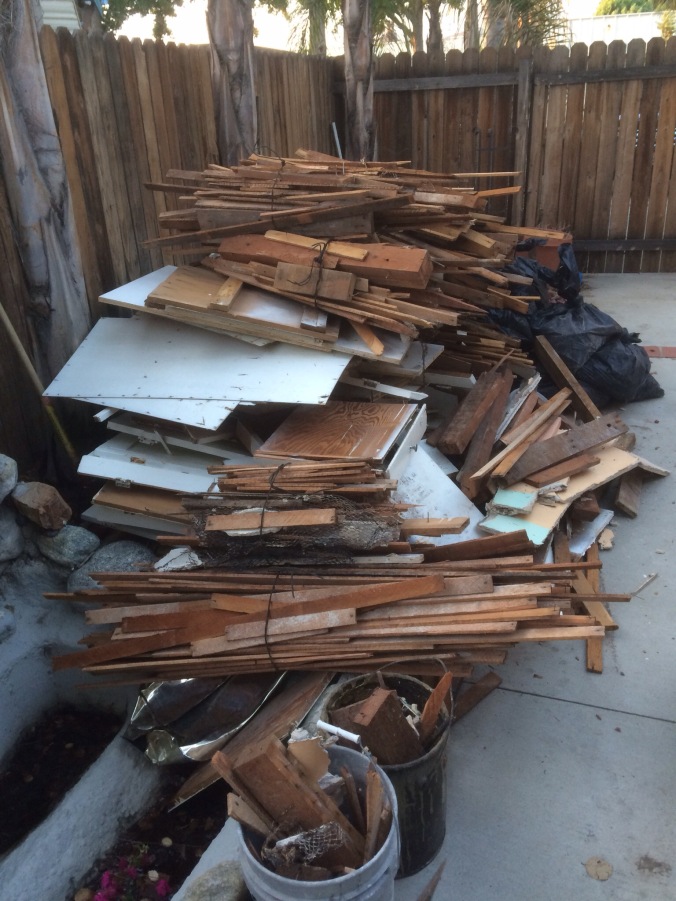 When it’s all done there’ll be a dishwasher, new tile counters, and self-closing cabinets. The whole thing should take about three weeks.

In the meantime we’re being creative with cooking and washing. With everything crammed into the dining room it’s like we’re raising a family in a single room studio. A small inconvenience when all is said and done.

Baseball might be the stupidest thing in my life. Why should a bunch of grown men playing a kid’s game matter so much? Why should another adult–who has three kids, work, and a home to worry about–care so much?

There are lots of ways I could answer that, justify it, explain it, but at the end of the day, none of them really makes the whole thing less stupid. But it is what it is. And, more importantly, I am bonded with millions and millions of other people in my stupidity. It is bigger than any one of us.  It is historic; its cultural.  It is a collective stupidity.

The Dodgers are doing alright at the present moment, and that makes me happy. If they make the playoffs this year, they’ll have to do better than the San Francisco Giants.  That’s pretty much the only way a team from the NL West is making the postseason this year, since both of the Wild Card berths are looking like they’ll go to teams in other divisions.

And that’s why this recent series against the Giants mattered so much.  That’s not logical, of course. Statistically speaking, every game against every team matters as much as the next. Win more than your divisional opponents and you make the playoffs.  But that’s the statistical reality of it. When you incorporate the bigger picture–the big stupid picture–certain games mean so much more than other games.

The Dodgers swept the Giants this week, and with that got one step closer to the playoffs. We went into this series 3.5 games ahead of San Francisco. To exit it 6.5 games ahead of them, in the first week of September, is pretty good. Add that to the fact that the Dodgers aren’t really playing all that well these days, and it makes them seem even better positioned since the team isn’t quite playing at its potential.

If the Dodgers win the division, it would be easy to write the story hinged around this past series. You’d say that this is when the division was won. After these three games, even if the Dodgers played .500 ball from here on out, the Giants would have to be 21-8 in the remainder f the season just to force a tie. Of course, it’s not beyond this Dodgers team to return to playing at or below .500, and then there’s a nice four-game series against the Giants again in the last week of the season.

See, drama and stupidity. The kind of stupidity that requires stories and the weighing of possibilities to help you deal with the stupidity.

Here’s another level to the stupidity of it all. While sweeping the Giants and pulling ahead to a more comfortable lead in the West makes me irrationally happy, and the fact that we’re doing that with a team not quite firing at full force makes me feel like there is potential for more, another part of me is less enthusiastic because we’re getting close to making the playoffs with a team that isn’t playing the way you need to to win in the postseason.

While I’m always glad to see a Dodgers team make the playoffs, that doesn’t always bring with it the same level of excitement year after year.  Some years–many years–they really don’t have much of a chance.  Of course, every team in the postseason has a chance to win the World Series, and that slight possibility is what keeps me glued to the TV and, often, sends me on an emotional roller coaster.  But if I don’t think they have a chance to make it very far in the postseason, some years I wish (I think?) they’d wouldn’t make it.

I actually think losing in the regular season hurts less than losing in the postseason.  Maybe it’s not really about “hurt” as much as frustration. And lord knows the Dodgers have provided me with a heaping pile of that in my lifetime.

The thing that matters more to me, though, is that in that same timeframe they’ve won only two World Series championships, one in 1981 and another in 1988. (LA’s three other championship seasons were in ’59, ’63, and ’65, before I was born).  Two of fifteen. That’s just better than a 13% completion rate for them in the postseason. That kind of sucks by my standards.

At least I’m not alone.

The Claremont Colleges kick off another academic year today, but you can’t take any of my classes. That’s because I’m on sabbatical for the fall and spring semesters.

This is the second sabbatical I’ve been lucky enough to have during my career, the last one being six years ago. That doesn’t seem all that long ago and then I remember Bush was still president. The election of Barack Obama, the death of Michael Jackson, and our collective awareness of the “Great Recession” were all part of my year of research and writing. So was buying our first house, and my two kids (there were only two then) turning 3 and 1.

Back then I was still working on my first book, which became Latinos at the Golden Gate. I had much of it researched, and most of it written, but it was still really underdeveloped and kind of all over the place. My sabbatical not only made it a better book; I’m not sure I would have ever had the time to bring it all together and get it published if not for that year. (And now that first book will be coming out in paperback in the spring!)

It already feels like I have a lot going on, almost as much as I normally would at the start of a typical academic year. The big exception is that all of it is related to one, overarching project: Mexican Americans and the Vietnam War. That’s the topic of my second book, which is now officially in progress. I’m also partnering with a local arts center in Pomona on a public history project that’s also related to Latinos and the military, only with a focus on the Pomona Valley. That’s a two-year project that will involve a lot of interviews and culminate in a museum exhibit in 2017.

After a wonderful “family” summer filled with trips to Big Sur, Yosemite, Comic Con, and Palm Springs, I’m primed and ready to get a lot done during this sabbatical year. I’ve been reading a lot these past few months as well as doing a bit of archival work. The months ahead will involve a lot more primary research––both archival and oral interviews––but my primary goal is to write as much of book #2 as I can.

I feel privileged to work at a place where support for faculty research is real and meaningful. I also feel lucky to be in the position to write this book at this moment.

In the months ahead I might start making use of this space to write a little more informally about my work. In the meantime, I wish all my colleagues a productive and fruitful academic year 2015-16!

Stained glass, doing its thing…
So proud of my dad for the success he’s enjoying in his second career. Here he is as the “father of the bride” in the new B of A commercial that’s been airing all over the place! (He gets even more screen time in the Spanish version.)
Here’s my class and my classroom (at least for the next two weeks). Year 17 as a Pomona College profe begins this morning, online. I haven’t been in a classroom with students in almost 2 years, and I can’t wait for it to come!
My Tweets